When it comes to the morning of the wedding, there is nothing more important than having a blast while getting ready with your bride-to-be and fellow maids. And by ‘having a blast’ we mean sipping on bubbly and shaking your booty to a kickass playlist. With a bit of the 80’s, a ton of the 90’s, and a healthy mix of the 21st century, our wedding morning playlist is perfect for ladies of all ages (including the MOB and MOG!). From classic love songs to popular party starters, you’ll go from singing your heart out to dancing your butt off (sometimes simultaneously).

“Love On Top” by Beyoncé
“Halo” by Beyoncé
“Crazy In Love” by Beyoncé and JAY Z
“I Wanna Dance with Somebody (Who Loves Me)” by Whitney Houston
“Bang Bang” by Jessie J, Ariana Grande and Nicki Minaj
“Always Be My Baby” by Mariah Carey
“Say My Name” by Destiny’s Child
“Fergalicious” by Fergie and will.i.am
“Don’t Cha” by The Pussycat Dolls and Busta Rhymes
“Wannabe” by Spice Girls
“Run the World (Girls)” by Beyoncé
“Milkshake” by Kelis
“Bootylicious” by Destiny’s Child
“Work It” by Missy Elliott
“Confident” by Demi Lovato
“Anaconda” by Nicki Minaj
“Independent Women, Pt. 1” by Destiny’s Child
“Only Girl (In The World)” by Rihanna
“Wild Thoughts” by DJ Khaled, Rihanna, and Bryson Tiller
“Come on over Baby (All I Want Is You)” by Christina Aguilera
“What a Girl Wants” by Christina Aguilera
“Ain’t No Other Man” by Christina Aguilera
“Soldier ft Lil Wayne” by Destiny’s Child, T.I., and Lil Wayne
“Lady Marmalade” by Christina Aguilera, Lil’ Kim, Mýa, and P!nk
“My Boo” by Usher, Alicia Keys
“Toxic” by Britney Spears
“Fallin'” by Alicia Keys
“You Da One” by Rihanna
“Drunk in Love” by Beyoncé and JAY Z
“Spice Up Your Life” by Spice Girls
“PYT (Pretty Young Thing)” by Michael Jackson
“All My Life” by K-Ci & JoJo
“All of Me” by John Legend
“Lucky” by Jason Mraz and Colbie Caillat
“Talking Body” by Tove Lo
“Let’s Get Married-Remix” by Jagged Edge
“Lovefool” by The Cardigans
“Marry You” Bruno Mars
“Happy” by Pharrell
“Can’t Stop the Feelin’” by Justin Timberlake
“What I Like About You” by The Romantics
“Despacito-Remix” by Luis Fonsi, Daddy Yankee, and Justin Bieber
“We Can’t Stop” by Miley Cyrus
“TiK ToK” by Kesha
“Uptown Funk” by Mark Ronson and Bruno Mars
“That’s What I Like” by Bruno Mars
“Starving” by Hailee Steinfeld
“Thinking Out Loud” by Ed Sheeran
“Classic” by MKTO
“Show Stopper” by Danity Kane
“I Think I’m in Love with You” by Jessica Simpson
“This I Promise You” by *NSYNC
“Him & I” by G-Eazy and Halsey
“Where My Girls At” by 702
“We R Who We R” by Kesha
“Finesse (Remix)” by Bruno Mars and Cardi B
“Poison” by Bell Biv DeVoe
“Whatta Man” by Salt-N-Pepa
“All For You” by Sister Hazel
“Wild Ones” by Flo Rida and Sia
“How We Do (Party)” by Rita Ora
“No Diggity” by Blackstreet
“Dark Horse” by Katy Perry and Juicy J
“Fantasy” by Mariah Carey and Ol’ Dirty Bastard
“Señorita” by Justin Timberlake
“Luv Me, Luv Me” by Shaggy and Samantha Cole
“Rather Be” Clean Bandit and Jess Glynne
“Talk That Talk” by Rihanna and JAY Z
“Cheap Thrills” by Sia
“Dangerous Woman”by Ariana Grande
“This Is How We Do” by Katy Perry
“Timber” by Pitbull and Kesha
“Love On The Brain” by Rihanna
“Make You Feel My Love” by Adele
“Fancy” by Iggy Azalea and Charli XCX
“This Feeling” by The Chainsmokers and Kelsea Ballerini
“The Middle” by Zedd
“I Want It That Way” Backstreet Boys
“Everybody (Backstreet’s Back)” by Backstreet Boys
“My Life Would Suck Without You” by Kelly Clarkson
“Love Shack” by The B-52’s
“We Belong” by Pat Benatar
“Walk This Way-Remix” Run-D.M.C. and Aerosmith

“Formation” by Beyoncé
“I Like It” by Cardi B
“Truth Hurts” by Lizzo
“Good As Hell” by Lizzo
“Juice” by Lizzo
“Motivation” by Normani
“Señorita” by Shawn Mendes and Camilla Cabello
“Havana” by Camilla Cabello
“Close To Me” by Ellie Goulding and Diplo feat. Swae Lee
“10,000 Hours” by Dan + Shay and Justin Bieber
“Starving” by Hailee Steinfeld
“Higher Love” Kygo and Whitney Houston
“Sucker” Jonas Brothers
“The Bones” Maren Morris
“I Don’t Care” by Ed Sheeran and Justin Bieber
“Beautiful Crazy” by Luke Combs
“Speechless” by Dan + Shay
“Prayed For You” by Matt Stell
“One Thing Right” by Kane Brown and Marshmello
“Good As You” by Kane Brown

You bet your booty we premade this playlist for you on Spotify.

If you don’t already have an account, simply download the free mobile app or desktop software to get set up today. If you do,  just click on the symbol in the top right corner to go straight to the playlist… and don’t forget to hit the ‘follow’ button so you have it queued up for the big day! 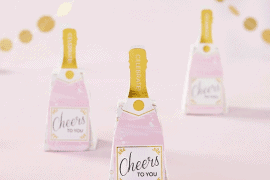 Bridal Shower Favors That Are Cute and Cost Effective 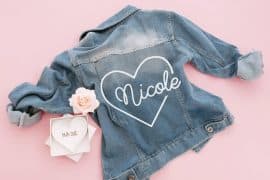 The 40 Best Engagement Gifts for Every Bride-to-Be